Abraham Maslow was an American psychologist that lived from 1908-1970. He is famously known for creating Maslow’s hierarchy of needs, a theory of mental health that is predicated on humans acting to fulfill their basic needs. Maslow’s pyramid of needs is very well known and famous. The more functional the person the higher in the pyramid of needs they can attain. The top of the pyramid is self-actualization. 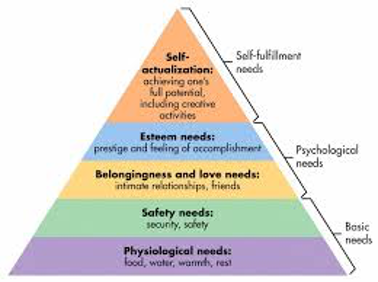 What is self-actualization? Maslow answered this question with his research published in the book Motivation and Personality in 1970. What does this have to do with financial planning? EVERYTHING!

All items listed here were pulled directly from Abraham Maslow’s book, Motivation and Personality, which was published in 1970.

Here is the list that Abraham Maslow derived. This list can be used to describe and recognize these rare minds.

1. More Efficient Perception of Reality and More Comfortable Relations With It.

“self-actualizing people have an unusual ability to detect the spurious, the fake, and the dishonest in personality, and in general to judge people correctly and efficiently” (Maslow, 1970).

Maslow suggests that this efficiency to detect falsehoods extended to many other areas of life, including, art, music, scientific matters and even politics. Self-actualizing people could spot inconsistencies or concealed realities far more easily than the average person.

This trait can easily be mistaken for “good taste or good judgment,” but throughout the study, it became clear to Maslow that this was in fact something beyond those two assumptions. He concluded that this was based on these people’s very consistent perception. They seemed to have a permanent view of what goes on behind the scenes.

2. Acceptance of Self, Others and Nature.

“They can accept their own human nature, with all its shortcomings, with all its discrepancies from the ideal image without feeling real concern” (Maslow, 1970).

Self-actualizing people lack overriding guilt, crippling shame and extreme anxiety. They are more content with life and all of its shortcomings. This is a direct contrast of the person who is constantly crippled by anxieties and worries.

The self-actualizing person is also able to enjoy their “animal-nature,” without feelings of regret, shame or apology. “They seem to have a uniformly good appetite for food; they seem to sleep well; they seem to enjoy their sexual lives without unnecessary inhibition and so on.” (Maslow 1970). This is not to say that they never experience guilt or shame, they just experience it in appropriate amounts and are rarely hindered by it.

“Their behavior is marked by simplicity and naturalness, and by lack of artificiality or straining for effect. His unconventionality is not superficial but essential or internal… and he is perhaps more human, more revealing of the original nature of the species” (Maslow 1970).

The self-actualizing person’s mind is inherently unconventional, and they may feel out of place in normal social situations; but they tend to play along with them as not to hurt anyone who thinks they are pleasing him. Though this person will never allow for a social convention to get in the way of their doing something important; they can easily drop their facade in order to achieve a goal.

The self-actualizing person is motivated by developing more fully into their own style, which is in direct contrast to the non self-actualizer, who is primarily motivated by basic needs gratification (ie food, water, shelter, sex).

“Self-actualizing people are in general strongly focused on problems outside themselves… they are not generally much concerned about themselves… These individuals customarily have some mission in life, some task to fulfill, some problem outside themselves which enlists much of their energies”  (Maslow, 1970).

Self-actualizing people tend to be focused on what could be called philosophical questions; they tend to live in the widest possible frame of reference. In other words, they see the big (biggest) picture.

This ability to view the world with such a large frame of reference holds a very important social and interpersonal importance. This ability of theirs has an innate way of imparting feelings of serenity and lack of worry that makes life less painful for not only themselves, but for all those who are associated with them.

“For all my subjects it is true that they can be solitary without harm to themselves and without discomfort… it is true for almost all that they positively like solitude and privacy to a definite greater degree than the average person.” (Maslow 1970).

Self-actualized people are often undisturbed by that which produces stress in others. This is one of the first things that people notice about self-actualizing people; they have an ability to remain calm and serene through personal misfortunes without reacting violently like the average person does. This can be due to their ability to stick with their own perception of events, rather than relying upon how others view the matter.

6. Autonomy (Independence of Culture and Environment)

The self-actualizing person is not at all dependent on what others think of them. This state of detachment can sometimes be mistaken for rebellion, especially by those who desire to control others.

“Self-actualizing people have the wonderful capacity to appreciate again and again, freshly and naively, the basic goods of life, with awe, pleasure, wonder and even ecstasy, however stale these experiences may have become to others… for such a person, any sunset may be as beautiful as the first one” (Maslow, 1970).

This “newness,” as C. Wilson had put it, is very refreshing for people who associate with self-actualizing people. A husband of 60 years may be just as awe-struck by his wife’s beauty at 80, as he was when he first married her. This is almost a child-like spirit or playfulness that never seems to dull with age. As Maslow puts it, even the thousandth flower for the self-actualized person is just as beautiful as the first.

“feelings of limitless horizons opening up to the vision, the feeling of being simultaneously more powerful and also more helpless than one ever was before, the feeling of great ecstasy and wonder and awe, the loss of placing in time and space with, finally, the conviction that something extremely important and valuable had happened.” (Maslow, 1970).

These peak experiences were noted by subjects to have occurred during sexual orgasm, as well as through intense enjoyment of music or art. These experiences even extended into a broader range of any experience which included any time there is a loss of self; problem centering, meditation or even intense concentration. Self-actualizing people tend to feel to the fullest extent, and feel in such a way that is out of reach to the average person.

“Peaking self-actualized people tend to live in a realm of being; of poetry, esthetics; symbols; transcendence’ “religion” of the mystical, personal, non institutional sort; and of end-experiences.” (Maslow 1905).

“Self-actualizing people have for human beings in general a deep feeling of identification, sympathy, and affection in spite of the occasional anger, impatience, or disgust… because of this they have a genuine desire to help the human race as if they were all members of a single family.” (Maslow 1970).

“Self actualizing people have deeper and more profound interpersonal relations than any other adults (although not necessarily deeper than those of children.) They are capable of more fusion, greater love, more perfect identification, more obliteration of the ego boundaries than other people would consider possible.” (Maslow, 1970).

Self-actualizing people tend to have very few close acquaintances, due to their extreme selectiveness. Their bonds are often deeper, but compared to the average person, their circle of friends is typically very small (if existent at all).

Self-actualized people also have no problem speaking “realistically and harshly of those who deserve it, and especially of the hypocritical, the pretentious, the pompous, or the self-inflated.” (Maslow, 1970). Social ranking is of no importance when the self-actualized person recognizes deception; whether these be of a religious, political or work-based nature.

“All my subjects may be said to be democratic people in the deepest possible sense… they can be and are friendly with anyone of a suitable character regardless of class, education, political belief, race or color… it is as if they are not even aware of these differences.” (Maslow, 1970). These individuals often select friends of an elite nature, thought not elite in birthright, race or color; but rather eliteness of character, capacity and talent.

These people easily learn from anybody who has something to teach them, no matter what characteristics they may have. This quality is often viewed as humility in the purest form. The majority of Maslow’s subjects exhibited an ability to respect all humans, just based on the fact that they are a fellow human being. This goes along with their very strong sense of right and wrong, or good and evil. Self-actualized people “are more likely rather than less likely to counterattack against evil men and evil behavior.” (Maslow, 1970).

12. Discrimination Between Good and Evil

“These individuals are strongly ethical, they have definite moral standards, they do right and do not do wrong. Needless to say, their notions of right and wrong and good and evil are often not the conventional ones.” (Maslow, 1970).

Self-actualizing people rarely have to debate within themselves whether or not an action is right or wrong. They seem to have an innate sense of right and wrong, though this sense may differ from that of the religious nature. These people may not even be religious at all.

“Their sense of humor is not of the ordinary type. They do not consider funny what the average man considers to be funny. They do not laugh at hostile humor or superiority humor… characteristically what they consider humor is more closely allied to philosophy than anything else… more akin to parables or fables.” (Maslow, 1970).

Self-actualized people tend to joke about humanity as a whole, and all of its shortcomings. Abraham Lincoln was a great example of this, he probably never made a joke that hurt anyone. His jokes always had a function beyond just invoking a laugh. They often carried with them subtle gems of wisdom.

“Each one shows in one way or another a special kind of creativeness or originality or inventiveness that has certain peculiar characteristics… which is akin to the universal creativeness of unspoiled children.” (Maslow, 1970).

Maslow goes on to say that this creativeness is different than that of a musician, or an artist. It is more related to the self-actualized person’s ability to do anything they are engaged in with a certain style. It is as if they are less inhibited or don’t care as much about how other people view them or their actions, this brings with their actions a certain freedom and beauty.

This creativeness is also closely akin to spontaneity, which is closely related to some of the behaviors seen in children. They have an almost perfect ability of finding joy in even the most monotonous of tasks.

15. The Transcendence of Culture; Resistance to Enculturation

“Self-actualizing people are not well adjusted (in the naive sense of approval of and identification with the culture). They get along with the culture in various ways, but of all of them it may be said that in a certain profound and meaningful sense they resist enculturation and maintain inner detachment from the culture in which they are immersed.” (Maslow, 1970).

Although self-actualizing people tend to appear normal on the outside, they are the least bit ordinary. Maslow also noted that the majority of his subjects never really “identified” with any organization or culture, they always seemed to set themselves outside of it, as if they didn’t belong to anything at all. This was noticed when he would ask them about American culture versus that of other cultures. They didn’t hold American culture with any higher regard than that of other cultures. This was quite odd, as the Vietnam was occurring during the time this research was conducted.

Do you know anyone who may be self-actualized? If so, who are they? What do YOU believe sets them apart from everyone else?